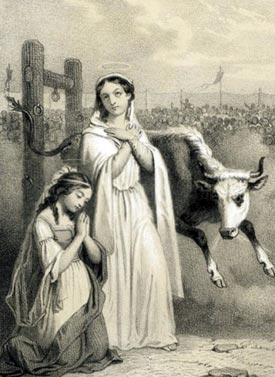 The account of the martyrdom of Sts. Perpetua and Felicity forms one of the finest pages of the history of the first centuries of the Church. It shows us clearly the wonderful sentiments of these two women when they heard that they had been condemned to the wild beasts. Knowing their own weakness but relying on the strength of Christ, who was fighting with them, they went to their martyrdom as to a triumphant celebration, to which they were invited by Christ. They were exposed to the fury of wild beasts in the amphitheater at Carthage, A.D. 203, and finally killed by the sword. Their names are still mentioned together in the Roman Canon of the Mass.

O God, at the urging of whose love the Martyrs Saints Perpetua and Felicity defied their persecutors and overcame the torment of earth, grant, we ask, by their prayers, that we may ever grow in your love. Through our Lord Jesus Christ, your Son, who lives and reigns with you in the unity of the Holy Spirit, one God, for ever and ever.

Vibia Perpetua, a well-to-do young woman and mother, and Felicitas, a slave who gave birth to a child three days before suffering a martyr’s death, were catechumens. Against such prospective converts the persecution of Septimius Severus was particularly severe. These two holy women suffered death on the seventh of March in Carthage. The Breviary relates the following touching episode:

Now the day had arrived when they were to be thrown to the wild beasts. Felicitas began to be sorrowful because she feared she would have to wait longer than her companions. For eight months she had been pregnant and therefore, according to Roman law, could not be executed before the birth of the child. But the prayers of her fellow sufferers hastened her time and she gave birth to a baby girl.

While she was suffering from the pains of childbirth, one of the guards called out to her, “If you are suffering so much now, what will you do when you are thrown to the wild beasts?” “Now I suffer,” she answered, “but there Another will be in me, who will suffer for me, because I will suffer for Him.” When she was in travail she had sorrow, but when she was set before the wild beasts she rejoiced (Martyrology).

Finally, on the seventh of March, these heroic women were led into the amphitheatre and severely scourged. Then they were tossed about by an exceptionally wild cow, gored, and thrown to the ground.